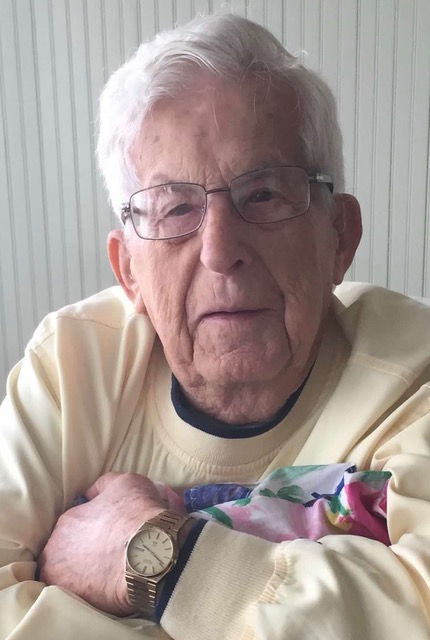 He was born in Erie on July 30, 1922, a son of the late Anthony and Stella Leonczyk Kolakowski.

Len graduated from Tech High School and went on to work for the United States Navy, serving at Pearl Harbor, then-Territory of Hawaii, during and after WWII.

Upon his return, Len married Therese Ann Piekanski (1922-1982), who had served as a WAVE in the Navy during the war. He began his postwar career as a painter with the Erie School District, and later worked for local homebuilders before retiring in 1986.

Len was a skilled and often sought-after painter because of his baseball-honed ambidexterity.

During retirement, Len and his longtime companion, Grace Horton, enjoyed dancing, traveling, making candy, playing pinochle with their many friends, and so much more.

Len was a 1994 inductee into the Pennsylvania Sports Hall of Fame. He was one of the Erie area’s greatest baseball and softball players. Len’s career in the late 1930’s and 1940’s was cut short by the advent of World War II and the call to serve his country. As a standout on Mike Cannavino’s Gunners team and later in the service, he saw action against scores of well-known Negro League and Major League baseball players, including the likes of Joe DiMaggio, Joe Gordon, Barney McCloskey and Stan Musial.

After the war, he played for Hawaii and the Toledo Mudhens in the St. Louis Browns farm system – a Triple A squad in the American Association. Upon leaving the pros, Len became an outstanding softball player and competed for and against some of the best barnstorming squads in softball history.

Physical activity was always a central function for Len, as he was an avid bowler and a golfer who shot his age or lower several times well into his 70’s and’80’s.

Len was a member of the Blessed Sacrament Ushers Club, Polish Falcons Club, and the Holy Trinity Society. In addition, Len was a longtime and enthusiastic participant in Times Old Newsies.

In addition to his parents, he was preceded in death by his wife, Therese Ann Piekanski Kolakowski, and 12 brothers and sisters.

Memorials may be made to Blessed Sacrament Church. Send condolences at www.BurtonQuinnScott.com