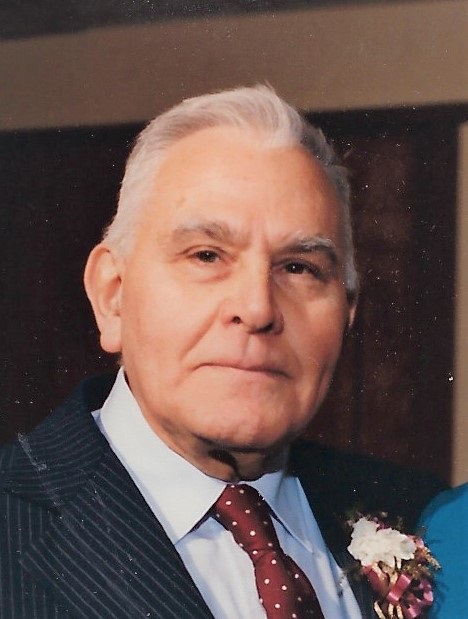 Julio C. Berarducci, age 101, of Erie passed away Wednesday, March 10, 2021 following a brief illness. He was born March 15, 1919 in Erie the son of the late Domenico and Rafaela Cavicchia Berarducci.

A lifelong resident of Erie, Julio graduated from Strong Vincent High School. During WWII he served in the US Army with the 12th Armored Division in the HQ Co 48th Armored Medical Battalion located in the Rhineland in central Europe, attaining the rank of sergeant.

Following the war, he owned and operated the Berarducci Insurance Agency as an insurance agent and real estate broker. He loved talking to people and enjoyed taking his wife and children on long drives. He also loved to play bocce and watching sporting events, especially football and baseball.

Besides his parents, he was preceded in death by his wife, Petronilla (Priscilla) Berarducci whom he married on April 24, 1949. He was also preceded by two brothers, Joseph and Vincent Berarducci, and his son-in-law, Jack D’Aurora.

Julio is survived by two daughters; Janet Agresti-Norman and her husband Louis Norman and Juliet D’Aurora, all of Erie. He is the grandfather of Amedeo Agresti III of New York City and Dominick D’Aurora and his wife Kate Overmoyer, PhD. of Clarion, PA. He is further survived by two great-grandchildren, Zachery and Evelyn D’Aurora.

Julio’s family would like to thank his special caregiver, Rosa Kennedy, for the time and attention paid to their father.

Friends are invited to call at the Quinn Funeral Home, West 9th & Liberty St. on Sunday, March 14, 2021, from 2:00 PM until 4:00 PM and are invited to attend Prayer Services there Monday at 10:30 AM followed by a Funeral Mass at 11:00 AM in St. Paul RC Church. Burial will be in Calvary Cemetery. All CDC guidelines including facemasks and social distancing will be followed.