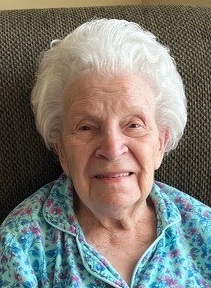 Judy was born Juliette Marie Potter, the eldest of five siblings, on July 3, 1924 in Huntington, Indiana, a daughter of the late Benjamin and Anna (Ludack) Potter.

She married Gunnar Hanson on March 31, 1942 in Ashland, WI, where they settled and raised three boys. In 1957 the family moved to Erie, following other relatives who had moved there for better employment opportunities.

In addition to her parents, she was preceded in death by her husband, Gunnar K. Hanson; and four siblings, Arbutus Johnston, Benjamin Potter, Sylvia Stoeber and Sally Kupczyk.

Judy is survived by her three sons, Daniel of Harborcreek, PA., James of Sky Valley, CA. and John of Springboro, PA. She also leaves several grandchildren and great-grandchildren; as well as nieces Faye Brocious and Margie Messenger, both of the Erie area, who cared for her during her final illness and facilitated her transfer to Manchester Commons five weeks ago.