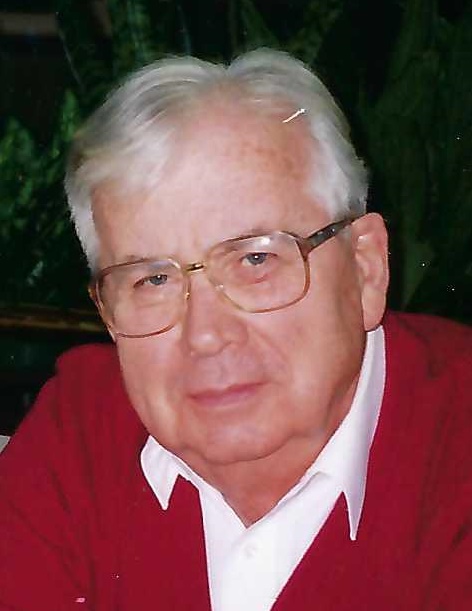 John W. Considine, a lifelong resident of Erie, Pennsylvania, died January 14, 2022 at the amazing age of 97.  His Irish wit and sharp mind were with him till the end and he was an avid Notre Dame fan. He was born April 11, 1924, the son of the late John and Alida Considine.  John was a graduate of East High School where he played center for the football team, was president of the class of 1942 and a member of student council.

He was a proud Army veteran of WWII, having fought in the Battle of the Bulge serving as Sergeant First Class. Among his decorations and citations are a Distinguished Unit badge, Victory medal, American Theater Service medal, EAME THR Service Medal with 3 Bronze Stars, an M1 RIF-SS Carbine Expert Combat Infantry, Administrative NCO, and the Good Conduct medal.

Upon returning to Erie after the war, he married his high school sweetheart, Ruth Marie Buckel Considine. They were married 70 years until her passing in 2017. He missed her every day.  Together they raised five children.

John was employed at Erie’s General Electric as a contract administrator retiring in 1985. While at GE he used his amazing Math skills to teach night school. He was a devout Catholic, a member of St. George Catholic Church, and had a great devotion to the Blessed Virgin Mary.

Besides his parents and his wife, he was preceded in death by his son and daughter-in-law, Jack and Cindy Considine of Houston, TX; two brothers, Drs. James and Richard Considine and a sister, Mary Jane Considine Barber.  Also, brothers-in-law Robert Barber and Richard Buckel and a sister-in-law Mary Lou Fogle and her husband Bill, and Mary (Walsh) Considine.

John is survived by his children, James Considine, his companion and caretaker; Jerry (Cheryl) Considine; Judy (George) Kopec, and Cathy (David) Stemmler. He is further survived by 9 grandchildren and 5 great-grandchildren.  Also, a sister-in-law, Judy Considine of Belle Mead, NJ., Winnie Buckel (Richard’s wife) and many nieces and nephews.

The Funeral Mass will be livestreamed on St. George's You Tube Channel: https://stgeorgeerie.org/live/

The family would like to thank the doctors and medical staff at St. Vincent Medical Center, LECOM, and Nightengale Nursing and Rehab Center.