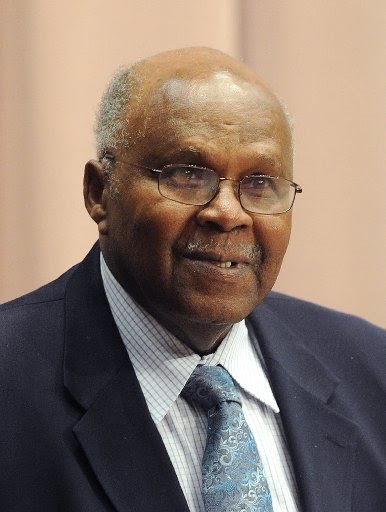 Eva Tucker, Jr., age 84, of Erie, transitioned to his heavenly home on Thursday April 30, 2020 at his residence, surrounded by his loving family.

Mr. Eva Tucker, Jr., an educator and community leader, was born on December 21, 1935 in Tunica County, MS to Eva Tucker, Sr. and Willa Mae Dixon Tucker; he was the oldest son of five siblings.

Eva married Evelyn F. Spears on September 17, 1961.  In 1964, they moved to Erie, PA, and he accepted a position with Penn State University, The Behrend College.  He was a Professor of Geoscience at Behrend for 39 years.

Mr. Tucker held a strong conviction for education, and felt ALL Erie students deserved a quality education.  As such, he served on the Erie School Board for 32 years, acting as President for six terms and Vice President for one term.

Eva was a very active, long time member of St. James AME Church.   He was a leader and a member of the Board of Stewards.

Mr. Tucker was truly a pioneer; his body of work in the Erie community was centered around improving educational opportunities and economic empowerment.  However, family was most important to him.  He was a loving husband, a positive role model as a father, and a doting grandfather.

In addition to his parents, he was preceded in death by his sister, Clemmie Dickerson, brother, Walter Tucker, and brother-in-law, Stewart Isaacs.  He is survived by his wife of 58 years, Evelyn Spears Tucker; two sons, Evan Tucker, of Erie and Everett (Cynthia) Tucker, of Dallas, TX;  three grandchildren, Alana, Amiya, and Myles Tucker.  He is further survived by his sisters, Juanita (Vernon) Bridges and Odessa Isaacs; a sister-in-law, Mary Tucker, and many nieces and nephews.

A private graveside service will be lived streamed starting at approximately 2:15 on Wed., May 6, 2020 and can be viewed at www.facebook.com/BurtonFuneralHomesAndCrematoryInc.  Burial will take place at Spring Grove Cemetery in Cincinnati OH.  A public memorial service will take place at a later date.  Arrangements by Burton Funeral Home and Crematory, Inc., 602 W. 10th St.