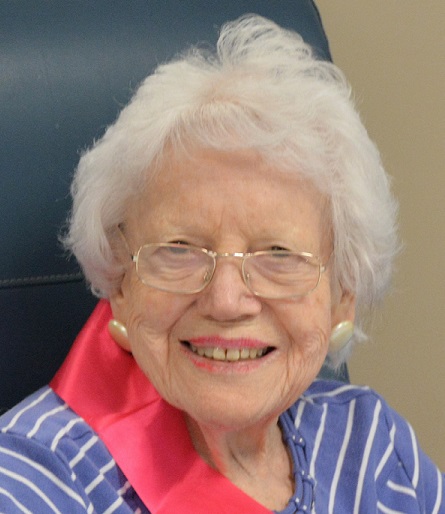 Dolores Marie “Dodie” Dalton Gallagher passed away on April 16, 2020 at Moses Cone Hospital in Greensboro, North Carolina following a long journey through dementia.  The celebration of a life well lived was further delayed by Covid 19 restrictions.  Dodie was a very caring daughter, sister, wife, mother, aunt, and friend whose presence will always be felt by those she loved.

She was born to Edward M. and Marie Kingston Dalton as the second of their five children.  After graduating from Academy High School in 1946, Dodie immediately started working as an Administrative Assistant in the Advertising Department at Continental Rubber Works, in Erie, Pa.  From the stories she told about her time at Continental it sounds like she had more fun at work than most people should be allowed and made many great lifelong friends.  It was during that time that she met her husband, John P. “Jack” Gallagher to whom she was married for fifty-three years until his death in 2009.  Dodie remained at Continental until she found her true passion and career as a full-time mother.  It is said that life does not come with a manual, it comes with a mother, and Dodie never failed in being that go-to source for advice on anything and everything that was needed.

She is survived her children:   Patricia Gallagher Blaetz and her husband Peter, along with their sons Zachary T. Blaetz and his wife Hunter, all of Burlington, North Carolina and Jarryd D. Blaetz of Raleigh, North Carolina; her son Kevin J. Gallagher, his wife Heather, and children Connor R. and Courtney M. Gallagher of Montrose New York, and her daughter-in-law, Bernadette Abrams Gallagher, and step-grandsons Keith Abrams and Nicholas Abrams of New York.  She is further survived by a step great-granddaughter, Delaney, who unfortunately she never got to meet.

Dodie is also survived by her sisters, Margaret A. Reinwald “Lani”, Mary E. Wygant and husband Richard Wygant, all of Erie, and Joan O’Connor of Springfield, Virginia.  Dodie’s relationship with her sisters was very special and they all were her very best friends her entire life.  She is further survived by many nieces, nephews, and cousins.

Dodie was a faithful member of St. Jude the Apostle Catholic Church and she and Jack were devoted volunteers at both the church, its community outreach programs, and at Our Lady’s Christian School when their children were young.  One of her proudest accomplishments was being instrumental in forming the Friends Over Fifty Group at her church and serving as their fearless leader for more than twenty-five years.  Dodie loved to play bridge and formed many wonderful friendships through the various groups in which she played.  Dodie will be best remembered as a kind, thoughtful woman who had an incredible sense of humor and a great laugh.  She was devoted to the people she loved, and they were always in her thoughts and prayers.

Dodie was predeceased by her parents, her husband, her brother, James E. “Ed” Dalton, her brother-in-law, Robert V. Reinwald, her nephew, Michael E. Wygant, and most sadly, her son, Timothy S. Gallagher, who died only four weeks before her in 2020.   One of the only benefits of having dementia was that she was probably pleasantly surprised to see him when she arrived in heaven as she was not informed of his death prior to her departure.

In lieu of flowers, people are asked to make a donation to L’Arche of Erie Inc. or to pass along a kind deed or word to others, or to volunteer to help someone who is less fortunate, which would be the perfect ways to honor Dodie who spent much of her life doing just those things.